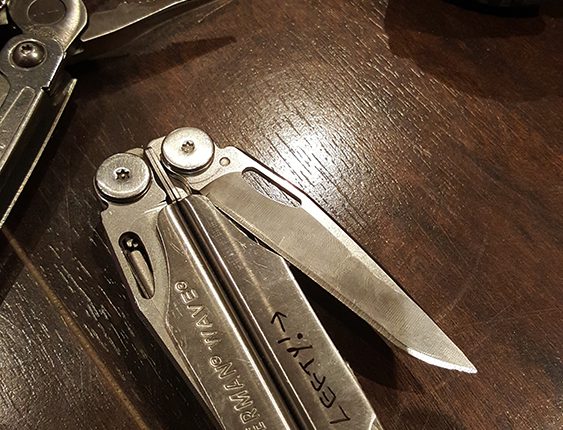 I have been a huge fan of Leatherman multitools since I first got my PSTII over 20 years ago and I have had many more since then.
My favorite though, has to be the Leatherman Wave, due to its size and the wealth of tools it contains within this compact little everyday carry’able. As great as this tool is, It’s not all rosie though, as I happen to be one of those 10% of us who are left hand dominant. Of course, the Leatherman company aren’t likely to factor in the relatively tiny number of us lefties when designing these things for their main customer base – Rightys.

This is a problem for me though, because of the way the quick access blades are located on the main body of the tool, making them easy to open for right handed users with a quick flick of the thumb.

Of course, that isn’t ideal for me then, and in the past this actually led to me carrying my multitools on my right side and just trying to adapt how I use it. One day I got curious though, and this led me to investigate the possibility of re-orientating the tool such that it works as originally intended, but in the left hand instead.

This actually turned out to be a lot easier than I first expected, with the only exception being the minor grinding to the frame in order to make some tools easier to open. My aim was to take the straight blade and sheepsfoot blade and switch their positions  with the saw and the diamond file respectively.

To do this, I needed to do some minor filing to the base of each blade where it interacts with the locking catch on the main body. This end is cut with a slight angle to allow the locking catch to engage, so we simply need to take the edge off of this so that it works the other way around. A little at a time here is the way forward, as taking away too much can cause the blade to rattle when locked.

After removing the blades previously with a security torx bit, the body was now ready to be modified too. This wasn’t strictly necessary for the tool to function, but doing so allows the saw and file to be accessed as easily as they originally were.

I applied some masking tape to the frame of the tool sections that housed the file and the saw and used this as a template that I could overlay on the opposite side to allow me to get as clean a cut as possible without looking like it had been modified. OEM-look was the aim here.

You can see here how I marked out where some of the cuts would be made, based on patterns taken from the opposite side. 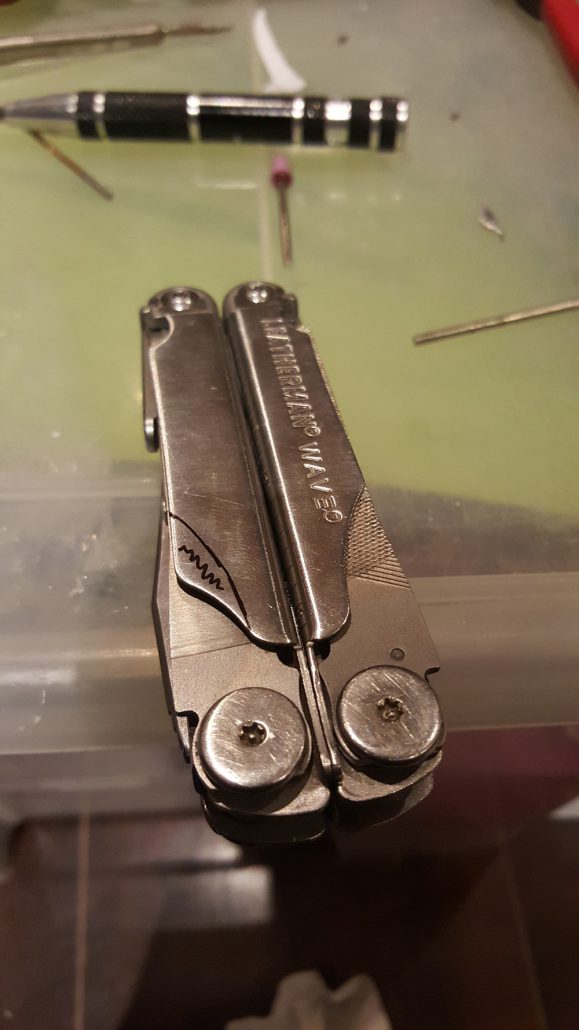 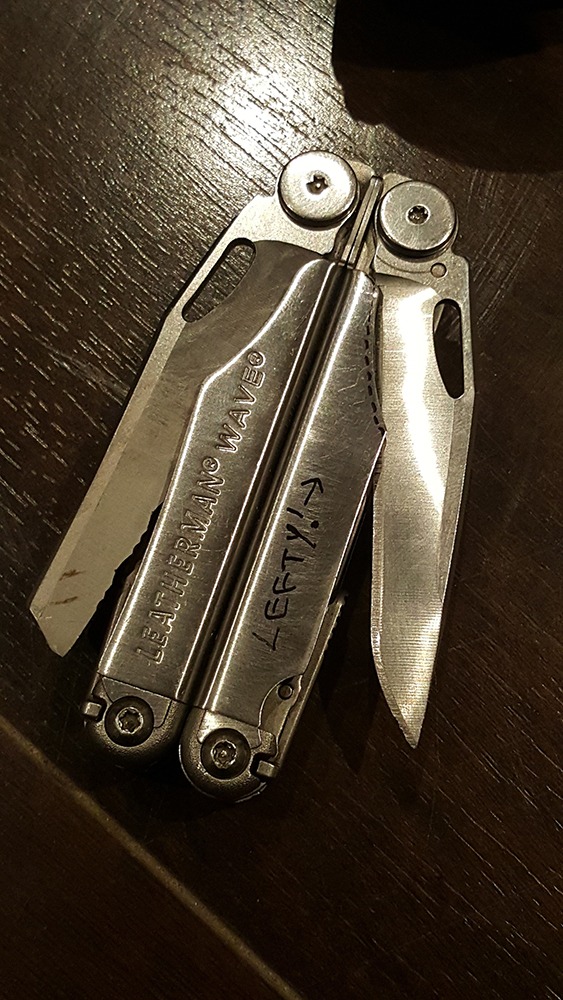 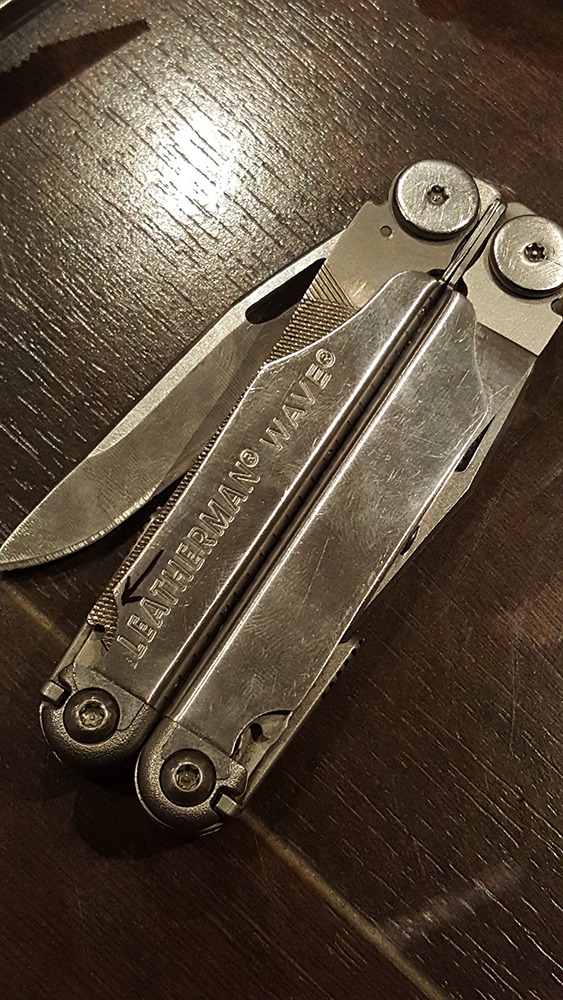 So with a little trimming, I was able to get the blade switched from the other side to this side with the minimal fuss. You can see that both blades are located on the same side at the time of the photo. The next step was to do the same process again on the remaining blade so that the knife blades are both in the correct positions on the tool, regardless of which way up its facing.

The little notch at the end is required in order to pick out the saw or diamond file with your fingernail. While the tool will still work without this cut, it’ll be a bit of an inconvenience to use. You can simply copy the shape of this notch from the position where the file/saw used to be positioned and transfer it to the new position. 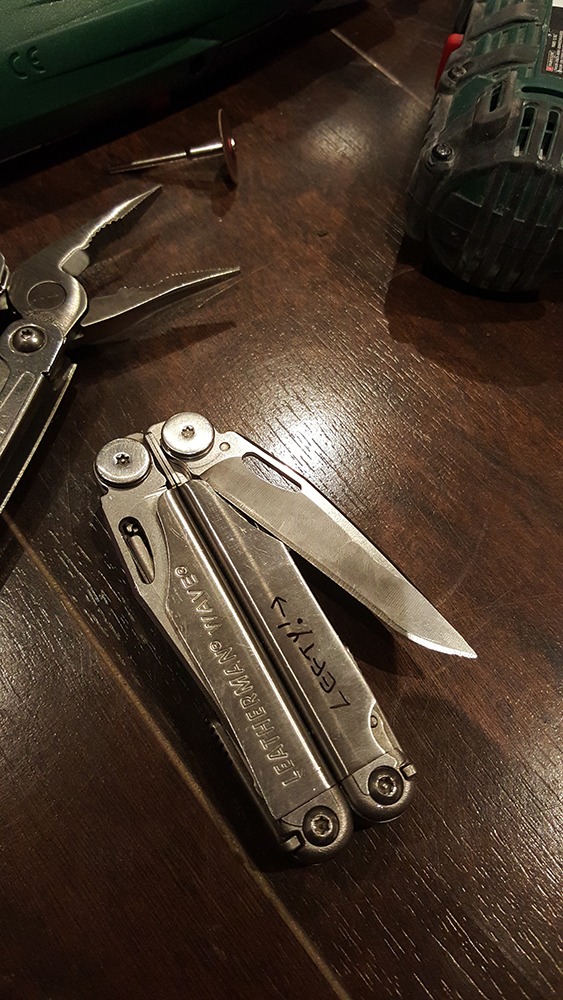 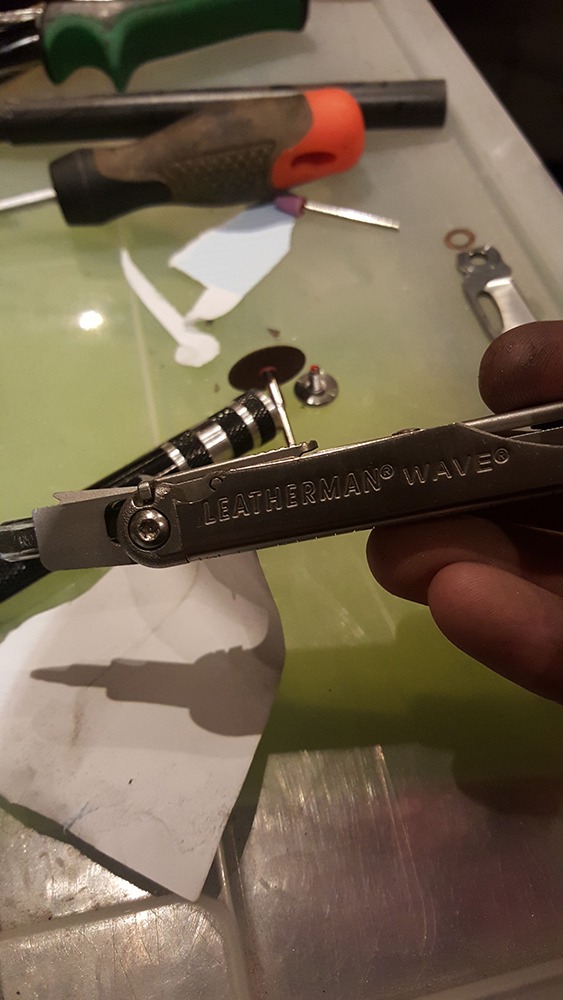 So that was a quick look at one of the trivial projects I like to do in my spare time. The tools necessary for this mod can be obtained pretty cheaply and I would estimate the mod to take approximately an hour to complete.

So I hope you found it interesting, and I hope to add more of my projects soon.