It’s that time of year again.

The days are getting shorter and the road conditions are becoming more and more hazardous in the evenings. Typically around this time of year, I give the car a going over to ensure that it is winter ready, before the weather gets too bad and this typically involves doing the regular maintenance oil change, inspecting the tires, brakes and undercarriage and all the lighting.

Something that is commonly seen in older cars though, is hazing or yellowing of the headlights, and that’s what I’ll be addressing today. This occurs due to age, as the surface of the lenses tarnish over time with dirt, washes and sunlight taking its toll. There’s a couple of way to address this and typically I do this with a machine polisher but today I’m going to be doing it by hand, so it’ll give you an idea of how you could do this yourself without needing to get any additional hardware.

You’ll be dampening one of these and using it to apply the compound. The other cloth will be used to clean off the headlight when your done and apply a finishing wax. 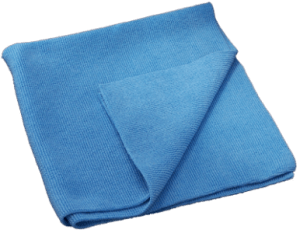 This is what actually does all the work (aside from your elbow!). There’s a lot of different polishing compounds out there but its important to get one that is a cutting compound and not a filler compound. What this means is that the cutting compound contains lots of micro abrasives and is effectively a really fine liquid sandpaper. Filler compounds on the other hand, only fill in scratches and make them a little harder to see for a short period rather than actually repairing the actual damage.

I have used many different brands, but some commonly available ones that are good for this project include Fareclá G3 and T-Cut scratch remover. These can be bought readily online or from places like Halfords etc. 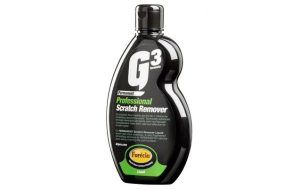 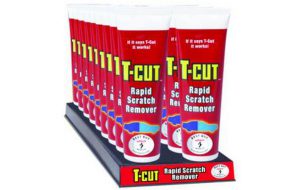 Again, there are many possible options for this but I had Fareclá Resin Superwax. The idea here is to seal the light lens after using the cutting compound and to give it a strong shine. 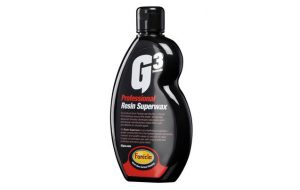 So you’re going to need the light clean to start with so you can do this right after washing the car, or simply clean down the lights themselves with a wet wipe. You don’t want to have any grit or dirt on the light when it comes to applying the compound, because this could actually cause a lot of new, deeper scratches when you rub it around the lens.

Once its clean, apply a little compound to a damp cloth like below. 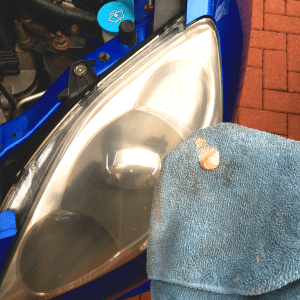 Spread this all around the lens of the headlight and then follow up with a circular polishing motion. It takes a bit of elbow grease when doing this by hand, but you should start to see the oxidation clearing away relatively quickly. I like to turn the light on every now, as this helps to see the area’s you might have missed. Don’t leave it on while you work though, as it’ll dry out the compound too quickly.

Once you’ve achieved a satisfactory level of shine, you can wipe down the light and apply a coat of the finishing wax. This step really depends on the type of wax that you’re using, but typically you would apply the wax with a damp cloth, rubbing it in well before flipping the cloth to the dry side and buffing off all of the wax residue. Your light will look as good as new.

Here’s a quick before and after of my headlights. You can see some streaks from cleaning them but the yellowing/haziness is obvious when you compare to the later shot. 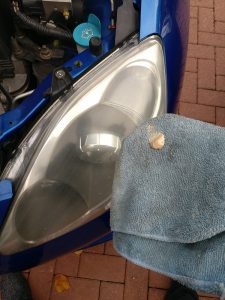 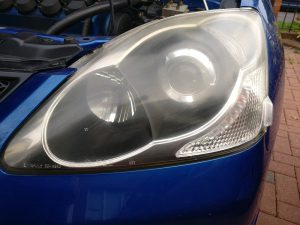 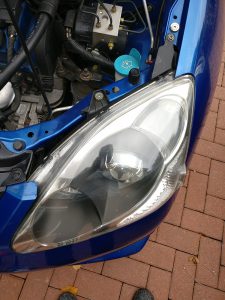 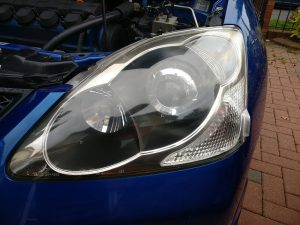 So there you have it!

The results on the road are obvious. A lot less of the generated light is refracted by the lens now that it has been polished, resulting in a much cleaner, brighter and well defined light with a sharp cutoff. Other road users will thank you too, as you’ll be giving off a lot less glare on the road.

I may follow this up with a post on machine polishing them in the near future. The finish is even better and with a lot less elbow grease too.

When doing this project, I later changed my headlight bulbs from the stock halogens to some new fangled LED numbers. I’m still testing them, but the results so far have been really impressive. Without test equipment, it is impossible to give accurate numbers but it appears that the light output has probably doubled and the colour temperature is much closer to white/blue with the new LED’s. The power consumption measured at the alternator is significantly lower with the new LED bulbs vs the old halogen too.

I may update at a later date with a post on these new bulbs.

Results are in! I got a 1st Class Hons! :D
Scroll to top